Celestial Musings of a Science Fiction and Fantasy Writer

Account Created on 9 September 2006 (#11106571) Last updated on 24 November 2011 Gift
Name:
Kenneth Mark Hoover
Location:
Dallas, Texas, United States
Website:
Kenneth Mark Hoover
External Services:
Schools:
Kenneth Mark Hoover was born in deep Louisiana sugarcane country but grew up in South Texas with cactus and horned toads. As a little boy he never wanted to do anything but write. He has two degrees, one in journalism and a bachelors degree in science (physics and chemistry) education. After teaching high school science for seven years he decided to write full-time.

Mark has sold over fifty short stories and articles. His fiction has appeared in various print and online magazines such as Ellery Queen's Mystery Magazine, the anthology Destination: Future, Beneath Ceaseless Skies, Fantastic Stories, Strange Horizons, Challenging Destiny, Drops of Crimson, Three Crow Press and others. His interviews with notable science fiction and fantasy writers can be found at Strange Horizons.

His website http://kennethmarkhoover.com also has lots of information about his writing and where you can find the Haxan stories. Check it out! He is also on Facebook under his real name, Kenneth Mark Hooover, and Twitter: @kmarkhoover

If you're interested in reading more about Haxan, including extra content and publication dates of stories, visit http://kennethmarkhoover.com/haxan .

He also runs an Internet station called Theater 13. The station broadcasts old time radio programs featuring horror, mystery and suspense genres. You can listen to these classic programs by visiting the site: http://theater13.net .

In 2005 his first novel, Fevreblau, was published by Five Star Press. The novel sold out its first print run and received good reviews. It helped him get noticed by a few editors and publishers. He is now working on a series of stories about the mythical town of Haxan, New Mexico. He meets another writer twice a week at a coffee shop where they write together, vent, and talk about the rapidly changing world of publishing.

Mark’s main passions outside writing include chess, amateur astronomy, Shotokan karate and politics. He is an unabashed Yellow Dog Democrat and an opinionated bookworm. As for musical tastes he listens to everything from Tchaikovsky to Rob Zombie. He’s also an opera fan. While he has worked as a surveyor, an educator and a salesman, his first love is writing.

Though he tries to attend science fiction conventions this sometimes doesn’t work out. He he is always happy to meet new writers and readers of all kinds of fiction and talk shop with them. He currently lives and writes in Dallas, TX.

Please, feel free to keep up with all things Kenneth Mark Hoover with this RSS Feed! 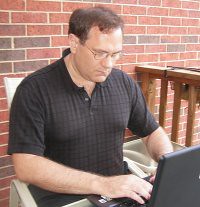